Published by:  Medicare Made Clear 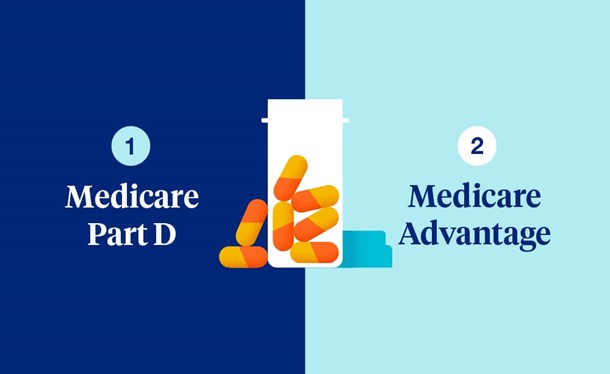 Original Medicare (Parts A & B) does not cover most prescription drugs.  Part A only covers certain drugs during an inpatient stay.  If you want a plan that offers prescription drug coverage, you have two options.

Both types of plans are offered by private insurance companies approved by Medicare and will vary in costs and coverage.

Many people who have Original Medicare will choose to purchase a stand-alone Medicare prescription drug plan (Part D plan).  By law, all Part D plans must cover a federally regulated list of commonly prescribed drugs.  However, each plan can decide which specific brands of drugs it will cover.  To get a Part D plan, you need to be enrolled in either Medicare Part A or Part B.

Note:  PDP plans can also be bought alongside certain Medicare Advantage plans that do not include drug coverage.

To get a Medicare Advantage plan, you must first be enrolled in both Part A and Part B.

Both the above Medicare prescription drug coverage options are only offered by private insurance companies approved by Medicare. Plans will vary in the list of drugs they cover, the costs they include and the area in which your plan works. No matter which plan you choose, a good rule of thumb is to always make sure the drugs you need are covered.

Understand How Medicare Will Affect Your HSA